Guinness (pedigree) was born on January 25th, 2011 in the home of Valérie Bourel, la Cornaline cattery. 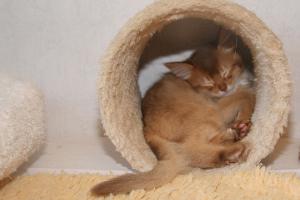 Guinness is a grand-grand-grand-daughter of Tikky de la Chacolaterie, and she arrived with us in end April 2011.
She is a cinnamon ticked tabby (sorrel) somali. Here she is, on the day of her arrival (left)
then three days later, playing the role of the very serious little schoolgirl :

She became part of the somali group very quickly, and likes to be on the very top of the cat tree :

She grows in elegance. Here she is, chasing butterflies in the grass enclosure (4.5 months old), then at 6.5 months old :

Guinness gave birth to 3 litters of ruddy babies, with Brownie as a dad : 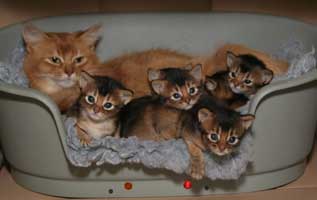 Of an emotive nature, Guinness is fairly shy with visitors,
but she can be very cuddly when she is confident (or during her heat periods...)

I hoped to give her the joy of being a mom again in 2016, but, on November 18th 2015, in the morning,
all of a sudden, while resting on the cat tree watching through the bay window, she gave a piercing cry, collapsed and... was dead !
The autopsy did not reveal any cardiac abnormality, nor did it give evidence of a cause for this sudden death,
the vet thinks she probably died from a stroke or aneurysm rupture.

The only comfort (for her offspring) is that the kidneys revealed they were free of any amyloïd deposits.