Guinness gave birth to the four babies sired by Brownie, between 2h50 and 6h54:
first two males, then two females.

All the details of the kitten's birth and their first month are here.

When the kittens were 16 days old, Edelweiss felt a sudden urge to care for the babies alongside Guinness: 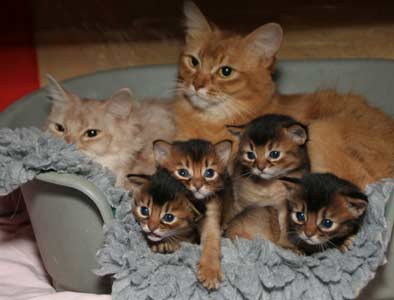 Here are the portraits of the babies for their first month (January 1st, 2014) :

5.5 weeks - they now explore every reachable corner and are able to reach higher places,
as long as there is material to hang on to climb. Here are new portraits taken January 8th, 2014:

February 1st, 2014 : the kittens are two months old. Mom Guinness is on heat again,
but is still very attentive to her kittens. 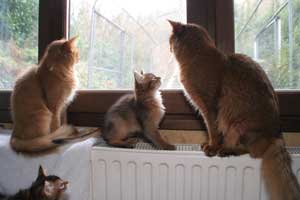 (the answer is: a blue tit)

A few pictures of the growing kittens approching 3 months :

I have a dream stayed home a bit longer with mom and dad,
and, thanks to an early spring weather, took the opportunity of discovering grass in the protected aviary: 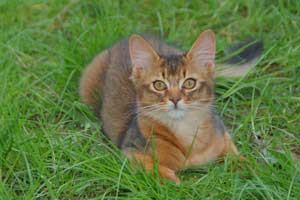 Now, all 4 kitties have gone to their new homes.