After a long period without Chacolaterie litters (for personal and family reasons,
as well as due to the unexpected premature death of Guinness),
our last-born, Jemima (August 2014 litter), met her prince,
Lou-Arn de la Rivaleraie, aka "Lou", chocolate somali born in 2015:

They had their first sexual experience together, with some awkwardness at the beginning,
but soon mastered the technique and seemed to really enjoy being together

On April 29th, 64 days after the beginning of the matings, Jemima felt something happening in her tummy...
Since early morning, she wanted me to stay close to her, purred continuously with a tiny "miaow" from time to time,
but palpable contractions only started at 16h15. Half an hour later, her first baby kitten was born:

These efforts deserve a little pause ! 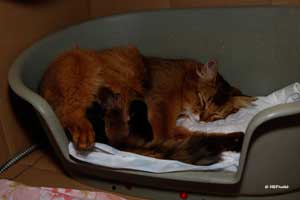 Unfortunately, the little ruddy female did not survive.

Family picture on May 1st (2 days old) with, from left to right: lilac, ruddy, chocolate, cinnamon 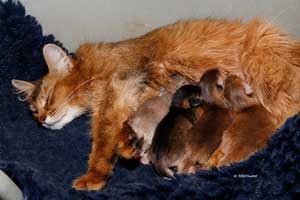 The weight curve, as well as the fights between the kittens to get a tit, soon revealed a problem with the milk bar:
Jemima is missing a tit on her left-hand side and only 3 tits could be activated.
Hence, I helped smooth the weight curve by complementing the kittens in turn since they were 2 days old.

May 6th - the chocolate female has both eyes fully opened (7 days old), the lilac male starts to open his,
whereas the ruddy male and the cinnamon female do not seem in a hurry to see the surrounding world !

May 11th - the chocolate female is the first to venture outside the nest to discover the surroundings,
her brothers and sister don't seem to care... yet !

May 14th - At 2 weeks old, their ears are still folded, but move slowly upwards every day...
... and Miss Choco is still the only one exploring the world !

May 19th - They would all like to go to the milk bar together (picture on the left), but since only 3 tits are operational,
they have to take turns, like on the picture at right where the cinnamon female is acting as a pillow for her mummy.

May 24th - Yesterday was a great move: from the "maternity" to the "nursery", with the nest at ground level
to enable the kittens to explore freely around them. They are building up interactions between them, sometimes
attempting to raise a paw (often losing balance) to touch their littermates, they also begin to clean themselves.

while the females seem to enjoy posing like starlettes

May 31st - they are now over one month old, but still don't accept anything but mom's milk, even though
their first little teeth are out (they love to chew on cardboard boxes or thick cloth).
Their motricity control improves daily, and they are having their first running races...

Here are a few naming proposals (not necessarily final):

5 weeks old, they all start to eat "like big ones".

June 11th : 6 weeks old, now all go in the litterbox like mom, and all eat with appetite,
even though they still enjoy being fed by mom.

The games are getting wilder, but when time is over, they all fall asleep almost instantly where they lie

June 13th - Jemima is on heat again. However, this doesn't seem to bother her kittens
who are in the process to experimenting what they can do with boxes of any kind:

There is no way to make a group picture unless they are on the verge of falling asleep: 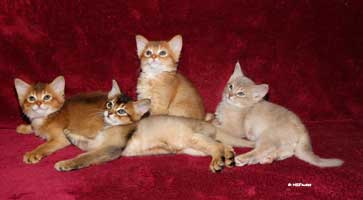 And you'd better be quick, because they don't need hypnose to fall asleep instantly.

June 25th : They are already 8 weeks old! Nougat has gone over the kilogram.
but Neko (100 grams below) is the best climber of all 4.

On July 4th, they had their big day at the vet's : microchip, first vaccine injection,
and buccal swabs for genetic tests. They behaved very well.

July 8th : they are 10 weeks old today. They are getting more and more close to me ; when they don't sleep
or play together (these two activities making up the largest part of their days), they are looking for my company
and want to follow every step I make.

11 weeks old: « sky view » of the 4 kitties busy discovering all facets of their new lion-head toy : 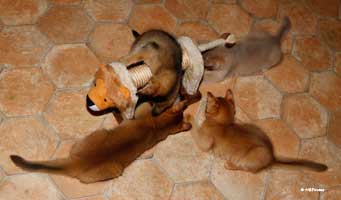 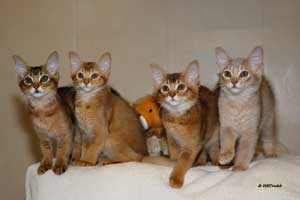 Individual portraits for their 3rd month:

3.5 months old : last picture with all 4 kittens, before Neko leaves to meet his new family ;
they're all battling for the same fur ball, while Jemima, though looking detached, keeps an attentive eye on what they're doing.

Neko has now moved to his new family, where he met a sorrel abyssinian girl.
Noisette will definitely stay at home with us.

October 2017 : Time has come for Nugget to move to her new family, where her too will have an abyssinian play companion !
Nougat is growing beautifully and will be present, together with his sister Noisette, in the Beaune cat show October 21-22.