Noisette (pedigree) was born in our home on April 29, 2017, within a rainbow litter of 4 kittens, each of a different colour.
Her mom is Jemima de la Chacolaterie, ruddy somali, and her dad is Lou-Arn de la Rivaleraie (pedigree), chocolate somali.
Here are Noisette's parents when they became friends (and more) : 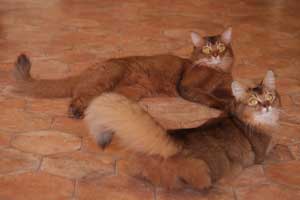 Noisette is a chocolate somali female, and this is a great event for our cattery « la Chacolaterie »,
because we never managed to breed a chocolate somali since our 1999 litter !
When Noisette is one month old, she ceremoniously takes possesssion of the
« Purrfect Chocolates » box (« it's mine !!! »)

Since then, she grew into a slender and elegant female, irresistibly curious of anything.

Her intelligence can be seen in her golden eyes.

She requests favors from her grand-dad Brownie (now neutered) during her heat periods,
he does lick her a bit but this is not enough to quench her desire.

The chosen male is a 10.5 years old cinnamon somali, Deglet Nour des Fauve & Or.
He will give Noisette...
babies ! 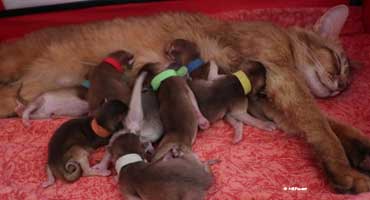 However, only 6 of them will be able to survive long.
Jemima (Noisette's mom) is also pregnant from the same male
and expects her babies 2.5 weeks later. Both moms will then cooperate
to raise their 12 kittens together;

All the pictures of this beautiful story can be seen on the 2019 litter page.
Among Noisette's kittens, a chocolate female called Pépite de Qiaokeli will remain with our family,
and on 24 November 2019, the 3 generations will successfully participate in a cat show with a specific
breed contest for abyssinian/somalis in Charleville-Mézières.