Doudou's little sisters are born ! They are litterally his "little" sisters : 60 grams and... 45 grams !
They were born during the night from 18 to 19 January.
Mom Alaska didn't have much trouble to deliver them quickly, given their weights.
I had never seen such tiny kittens (in particular 45 grams...) in 10 years of breeding,
but both sisters were tonic, wanted to live and their mom took good care of them.

Both opened their eyes on their 9th day.
I helped the tiniest one during a few days by tube-feeding her in addition to her mom's milk.
I didn't dare to give her more than 2 ml at a time, and even then, you could feel her "full" stomach with this,
and she would fall soundly asleep against mom.
I wouldn't have believed that, two months later, she would have reached the same weight as her sister !
Her nickname "Pimousse" (from a known advertisement saying "tiny but strong") fits her well.

So this is Pimousse at left, so small compared to Alaska's paw, and Etincelle's head emerging from under mom's belly.

5 weeks old : life alternates between cuddles among mom's hair and discovering all dimensions of the room.

Two months old already ! Now Pimousse is no longer a little shrimp with skin and bones,
she has become a charming little female (she loves to kiss you by licking you)
and Etincelle (left on the center picture, and picture at right) is a little clown full of curiosity and sweetness.

Games and discoveries alternate, under quiet but close control by mom.
Pimousse and her interrogating tail is on the picture at right,
and the line belows features two pictures of the always curious Etincelle.

Here is Etincelle with her beautiful black and white contrast (top row with Pimousse in the background),
and close-ups of Pimousse (second row).

14 weeks already... Pimousse and Etincelle have gone to their new homes
A few days before, I offered them a picture session in the garden...

This is Pimousse discovering the sunny outside, then when she arrived in her new home,
where she soon found the strategic places in the cat tree (right in front of the window !)

And here comes Etincelle, also discovering the grass and trees, then upon arrival in her new home
where her interest for playing with humans and toys is far greater than for eating the croquettes...

Here is Pimousse at 6 months old :

Brownie and Alaska are real close friends...
They knew perfectly well that I wanted them to wait next year, but they managed to...

And here they are, Alaska had two new babies on July 31st !
A black silver male and a ruddy female. Here they are, just new-born : 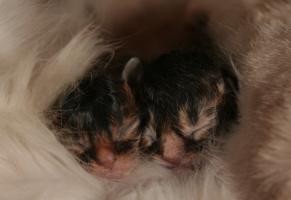 The little ruddy female was born as a "turn-coat", i.e. with a normally-coloured head and tail, but with light-coloured body,
almost looking like a blue, and not much muscles and fat.
This phenomenon could be linked with a lack of nutrients or hypoxia during the last days before birth
(maybe a premature release of the placenta ???)
On these pictures, the difference is obvious between the normally-coloured male at left and the turn-coat female at right.

12 days old : Elfquest, also known as "Elfie", the little female (at left) and her "big" brother ENS (middle)
are trying to get up on their little paws to great you. Then they decide to have a nap.

When they were between 2 and 3 weeks old, what was planned happened :
Pompon (great-aunt) thought Alaska wasn't enough as a mother and wanted to take care of the kitties as well !
(she's used to do this for every litter) 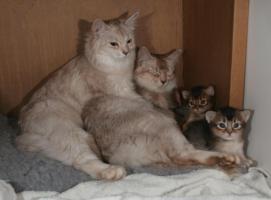 At one month old, play is getting a greater importance, but Pompon is always there for a cuddle...
(should I dare to say at least as much, or even more, than mom Alaska ?)

5 weeks and a half old. Both kittens now want to do everything like "the big ones", eating croquettes,
drinking water from the fountain and climbing up and down the stairs.

7 weeks old : ENS is always ready to play, most of the time with Elfie and us,
but also with mom Alaska (at left) who tried to sleep... or with great-grand-dad Rromynet (at right) !
Little Elfie (in the middle) during a resting moment.

The big cat-tree holds no mystery for them any more!
They now look upon their parents from the top shelf...

ENS and Elfie still learn a lot by playing together, by imitating mom Alaska or dad Brownie,
who plays more and more with his kittens now that they aren't babies any more.
Sneaking in Pompon's nest to get a lick is also highly appreciated...

It's becoming hard to take pictures without a blur... they are running and jumping soooo fast !
I must wait till they're starting to tire a little...

Two months and a half, ENS and Elfie grow in charm and complicity
ENS is even growing a little ruff already !

They are very efficient at detecting the slightest piece of wallpaper coming off...
And if I don't answer my emails quick enough, don't be surprised, it's because Elfie has blocked my keyboard !!!

ENS is a great hunter... of feathers ! (right picture)
And doesn't even seem surprised at his sibling in the mirror...

As for Elfie, she's a cutie... A small kitty, but very imaginative to reach her goals !
Here she is, under every angle thanks to the bathroom mirror...

Elfie hunts, takes the pose, rests... like a star for Jean-Michel Labat :

ENS and Elfie grow in beauty and will both have the extraordinary expressiveness of their parents.
It's difficult to take pictures of ENS, because he comes to play and cuddle on me as soon as I'm around !!!
He doesn't dislike having a cuddle with mom Alaska either...

Elfie is a daring little girl who loves to try new experiences everyday... we never get bored looking at her antics ! 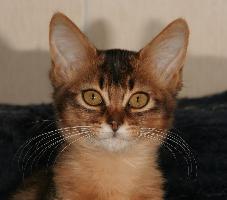 ENS loves more and more to jump and stay on my shoulders. Here, he is looking from the cat tree : 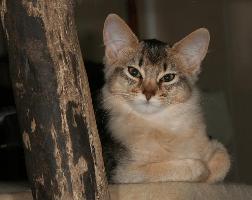 December 2009 : Elfie and ENS are testing all places on the new cat tree :

Elfie and ENS have enjoyed supervising the Christmas decorations...
Sooo much that they were very tired afterwards !

It had to happen one day... Our little lady has now moved to her new home.
Here she is, upon arrival (left), and a few days later (right) together with a norwegian-type female with whom she now shares her days :

ENS is growing, but he remains a kid when he plays !
He now has so much rufusing on his front paws that they look like those of a non silver cat !
But the back of his fluffy tail is of a perfect white, and his silky hair is even softer than his parents'.

Look how proud he seems for his 6 months :

And cuddling in the tree basket at 9 months old : 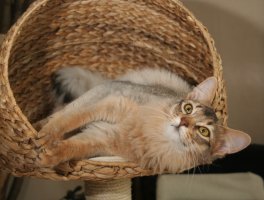 Une Pomponnette had her babies during the 12/13 September week-end... what a story !
A caesarean section was done for the last one (a fawn silver female who had decided to stay in the womb for already 69 days...)
There she is (2 days old, picture at left), family picture at center and her brother (5 days old, picture at right)

10 days old... "Pompon" indulges in about 10 minutes per day out of the nest... She is a very attentive mom.
Here is the female, asleep on mom's paw, and Eclair (the male) who already has his eyes well opened.

At two weeks old, Eclair and his sister start to prop themselves up,
but they have drunk so much milk that their little bellies are hard to push up !
Sometimes, an extra "big" kitten creeps in the nest (here Elfie).

3 weeks old (and about 400 grams each...), the two babies just start to get some interest in what's outside the nest.

Eclair and Edelweiss are now one month old.
Here is cute little Edelweiss (on the picture at left and leftmost kitten on the central picture with mom),
and Eclair, ready to pounce at right.

One month and a half already! Eclair and Edelweiss are developing a beautiful silver coat.
They are having great moments of chasing each other, and, when Eclair has decided to rest for a while,
it happens that his sister wants to go on playing and comes back and tries to convince him (right picture).

Here is Edelweiss, who doesn't doubt she can be as strong as Brownie if she eats as much as him...

She is now performing for you one of her favourite exercices : the knot rope.

For their 2 months, Eclair and Edelweiss were pictures by Jean-Michel Labat :

Eclair (on top) and Edelweiss (oblique) rest in their favority hammoc : 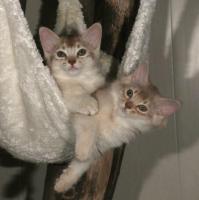 Eclair and Edelweiss have had their share of playing with the Christmas decoration magic box...

With Eclair gone to his new family, Edelweiss often plays with Elfie : 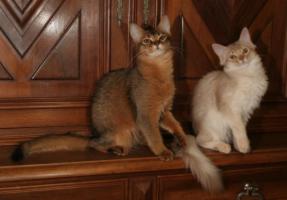 Time has come for Elfie to go to her new family.
Edelweiss, who stays with us, is requesting even more playing sessions with us ! 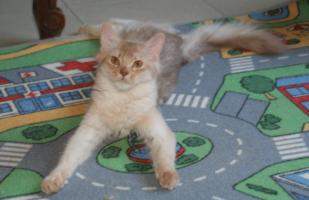 Want to see more ? Edelweiss now invites you to visit her own page...