Alaska gave birth to three kittens on June 25, 2008, all three were ruddies (it was a 50% chance...).
By chronological order, I saw appear a tiny male (62 grams), then a bigger male, then the placenta of the first one
(who patiently waited at the end of his umbilical chord till his brother was fully out...),
then the second one's placenta, and finally a female with her own placenta. 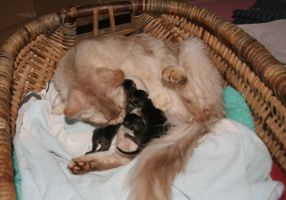 The tiny one did not manage to survive more than half a day, he wasn't very tonic and didn't really want to suckle.
I'm sad to say that the little girl died of unexplained reason at 3 days old... the autopsy did not reveal anything wrong.
So only one big "Doudou" boy remained, who grows well. Here he is, first new-born, then 4 days old :

Of course, Pompon could not resist long to join in the nest before her own kittens are born :
Doudou then found himself as sole baby but with 2 mothers, who cross arms together to protect him ! 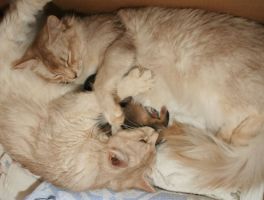 Here they are, one week old. While his two sisters are soundly sleeping on mom-pillow,
the little male is blinking at you !

On July 12th, they all have they eyes wide open on the world,
and begin to try a few play moves between them. Here is Doudou, first 2 weeks old, then 3 weeks old :

Here they are all together, the 4 of them (Doudou is 3.5 weeks old, and the black silvers are 2.5 weeks old)

Doudou has been one month old on 25 July... He isn't yet interested in tasting something else than mom's milk,
but Domino already loves to gnaw on tiny chicken pieces !

Domino and his two sisters

(pronounce Duìbi, this means "contrast" in Chinese) and Dew Pearl
follow everything that Doudou does and they now explore the whole room.
They are so funny, with their little tails up, and coming as soon as I talk to them !

Crazy runs, stairs, pounces, that's it now !
I must wait for the resting times just before the kittens fall asleep to take pictures, now...
Here is Doudou (left, playing hide and seek in a tube) and Domino (right).

And here are the two little females, Duibi (left) and Dew Pearl (right)

When he is not playing with his (half) brother and sisters, Doudou spends moments with his parents...
Here he is, posing in front of mom, then having lunch between mom and dad, and (right) hiding in the cat tree's hammock.

Here is a group portrait, while they were all on the same platform of the cat tree:

Duibi (center and middle picture), her sister Dew Pearl (left) and her brother Domino (right)
pose on the day of their 2 months.
On the right picture, Doudou holds the tail of his green mouse.

The hanging storage sold by Ikea for kids to put away their soft toys is always so attractive:
"Cats at every level" (middle picture, below, framed by 2 pictures of Doudou)

Now, may I introduce Dina (picture at left), renamed at the request of her future family
(if you think you recognized Dew Pearl, you're right, it' the same kitty !!!)

On the picture at right, Duibi puts a protective paw on her brother Domino.

Time has come for the kitties to go to their new homes...
Here are their pictures just before they leave la Chacolaterie :

Duibi remains a bit longer in our home, since she will then go abroad,
and she took this opportunity to participate to her first cat show (she was awarded a Best Variety price),
between dad (to play) and mom (to suckle when coming back from the podium)

Here she is, just before leaving for the Netherlands where she is now living in the same home as her grand-dad Roller.
she alternates between moments of relative quietness (left, middle) and moments of intense activity
(right, she is visiting the mouse cage... [while the mouse is out])

as well as Duibi refreshing her tail in the pond...

Doudou, looking so proud of his "panache" that he is moving it too fast for the camera... 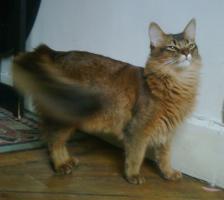 and also Domino, not a bit less proud with his growing collar : 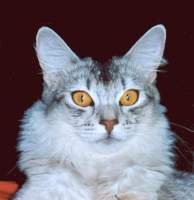