Rromynet, sorrel somali (SOM o) [pedigree] was born at the Fauve et Or cattery on 10 January 2000.
We loved so much the look of his daddy (Endy, born at the Foxykats cattery) that we were eager to adopt one of his sons.

Rromynet never never tires of being petted, and loves to come and do his head butts
or sprawl on the zzzzzzzzzzzzziiiiiiiiiiiiiooooooooooooo computer keyboard (didn't I tell you ?)

Here are a few pictures when he was a young adult, with no ruff yet.
His wonderful green eyes have now become even more dense in colour after a few years.

Unfortunately, Rromynet, shortly after his first mating, started to spray and spray and spray !
We then had a veranda built for him adjacent to the kitchen and dining room,
but he was unhappy not being in our company all the time.

So we decided to have his quality of life take precedence over our wish for kittens,
and he became the eunuch of the house, getting access again to the whole house (and the girls). 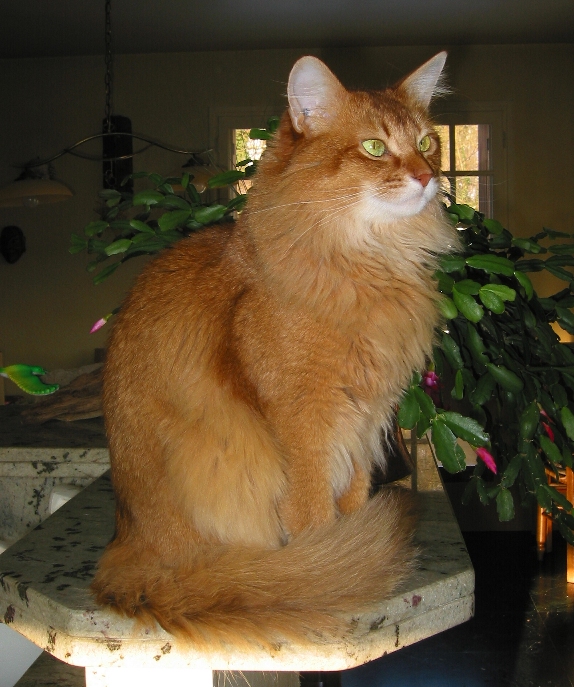 He likes to baby-sit the kittens, from time to time, as a careful grand'pa,
even though his stature may sometimes impress the little ones !

His green eyes ask for hugs, head butts, cuddles, and he never tires of them.

Rromynet was accompanied for his last sleep on July 21st, 2016.
He is greatly missed and remains forever in my heart.